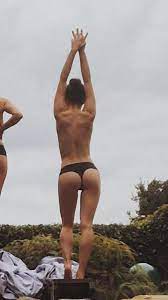 Celebrity Maisie Williams shows-offs her Body Type One (BT1) figure/shape at a photoshoot and while taking time off at the beach. The candid images reveal no signs of skinny fat (cellulite, thin fat, loose/saggy skin, crepey skin, normal weight obesity) at her young age. One of the many advantages of a BT1.

Science recognizes that one pound of muscle burns six calories daily but one pound of fat/skinny fat only burns two to three calories. Having all those developed vertebrae (posture), muscles, and muscle mass assist greatly in terms of metabolism (BMR) and metabolic rate. Which helps with keeping any excess fat weight at bay.

BMI and genetics/DNA are important. But diet, exercise, and lifestyle also matter. It will be interesting to see how well Maisie Williams maintains her body shape figure as she ages.

Emmy Award-nominated Actress Maisie Williams on the red carpet and enjoying time off in her Body Type One shape/figure with friends and family.  She rose to stardom thanks to her popular role as Arya Stark (Emmy Award-nominee 2016 and 2019, Supporting Actress in a Drama category) in the epic HBO medieval fantasy drama series Game of Thrones. Her upcoming role in the Hulu limited series Pistol, which tells the story of the British punk band the Sex Pistols, was difficult due to the nudity involved.

Most recently, Maisie Williams has challenged the idea of traditional beauty. She cut her hair into a mullet, then bleached it along with her eyebrows. You can read more about her beauty activism in the digital magazine Porter.