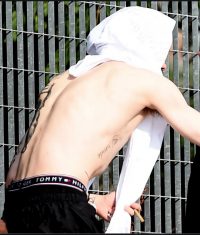 Celebrity Pete Davidson displays his Body Type One (BT1) physique on-set and during the movie The King of Staten Island. The tattoos make the fully developed BT1 Classic Arch and Dimples a bit less obvious. He is likely able to eat and drink whatever he wants with little consequence at his relatively young age, one of the many advantages that fully developed BT1 vertebrae (posture), muscles, and muscle mass offer.

Science recognizes that one pound of muscle mass burns 6 calories daily but one pound of fat/skinny fat only burns two to three calories. Diet, exercise, lifestyle, metabolism, and BMI matter. But so do genes/genetics/DNA.

It will be interesting to see how well Pete Davidson maintains his muscular physique as he ages.

He has been in the news more than usual lately because he is currently dating superstar Kim Kardashian. Other recent and past famous girlfriends have included Ariana Grande, Kate Beckinsale, Margaret Qualley, Kaia Gerber, and Phoebe Dynevor. His father was a New York firefighter who died in service during the attacks on September 11, 2001 (9/11).