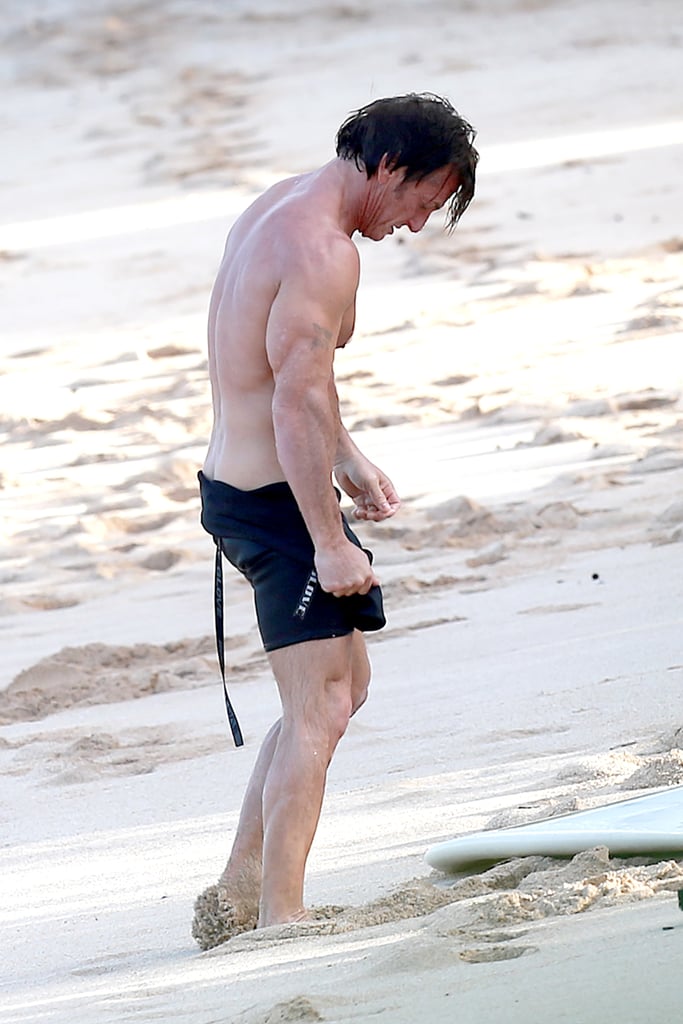 Celebrity Sean Penn displays his Body Type One (BT1) physique while at the beach with his now ex-wife Leila George. The fully developed vertebrae, muscles/muscle mass, and posture are clear. One pound of muscle mass burns 6 calories per day, but 1 pound of skinny fat/fat mass only burns 2-3 calories daily, which directly affects metabolism.

Having a strong metabolism because of all that muscle and muscle mass, no less, is an advantage that a fully developed BT1 offers. Along with aging gracefully. Diet, exercise, lifestyle, metabolism, and BMI matter, but so do genes/genetics/DNA.

His BT1 has aged very well as time has passed, all things considered. However, at 61, his age is starting to show more. Although, one has to wonder if he did not smoke cigarettes and drink alcohol regularly just how well Sean Penn would maintain his body shape physique as the years continue to pass.

Academy award-winning actor Sean Penn shows off his Body Type One physique while exercising and taking some time off. He has won two Oscars for Best Actor, one for Mystic River (2003) and one for Milk (2008). The intense training required for many of his superstar Hollywood movie roles in his long career (69 or so movies) only helps further increase his metabolic rate.

The movie Flag Day (2021) was his directorial debut. His famous exes Madonna and Robin Wright likely have Body Type One (BT1) bodies as well. You can catch him on social media including Twitter, Instagram, and Facebook.

Over the years, Sean Penn has never shied away from being a true humanitarian. He risked his own life helping out in the aftermath of Hurricane Katrina. His non-profit CORE has done incredible work globally including in Haiti. He originally co-founded the J/P Haitian Relief Organization after the 2010 earthquake. Most recently, he was in Ukraine filming a documentary about Russia’s illegal invasion and war.

In early 2022, he was also embroiled in controversy over his comments about men having become too feminized, attributing shifting gender norms to “cowardly genes.” Body Type Science plays into his comments, including genetics/DNA along with soul energy, particularly male and female energy relative to the right brain and left brain hemispheres. Finally, he took on Fox News during an interview with Sean Hannity, telling the far-right tv personality all the reasons he does not trust the network.