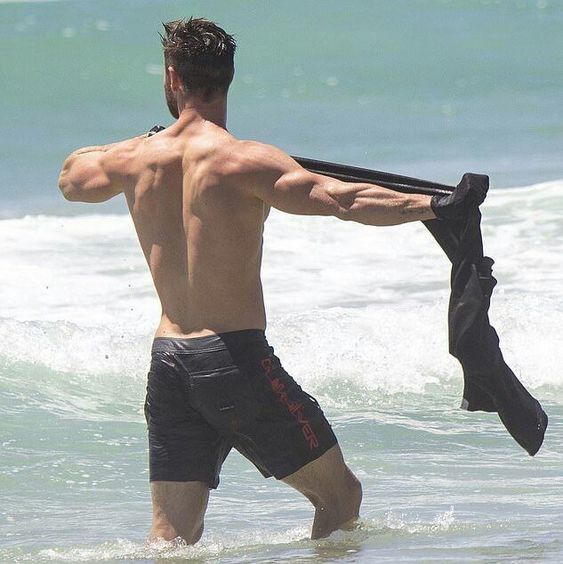 (Top/Left)Celebrity Chris Hemsworth displays his Body Type One (BT1) physique at the beach with his wife Elsa Pataky, family, and friends. The fully developed vertebrae, muscles/muscle mass, and posture including Classic Arch and Dimples are obvious. Science recognizes that one (1) pound of muscle mass burns six (6) calories per day, but one (1) pound of skinny fat/fat mass only burns two (2) to three (3) calories daily, which directly affects metabolism.

Due to all the extra muscles/mass, he is likely in the overweight or obese columns relative to his safe BMI weight range. Although it is very clear he is not obese or dealing with excess fat. More evidence BMI is not accurate.

Having a strong metabolism because of all the muscle and muscle mass, no less, is one of the many advantages that a fully developed BT1 offers. Diet, exercise, lifestyle, metabolism, and BMI matter, but so do genes/genetics/DNA. It will be interesting to see how well Chris Hemsworth manages and maintains his muscular physique as he ages.

Actor Chris Hemsworth shows off his Body Type One physique while preparing for a day a the ocean and during one of his movies. Muscle burns even more calories during physically strenuous activities like bulking up for superstar movie roles including Avengers: Endgame, Avengers: Infinity War, Avengers: Age of Ultron, Star Trek Into Darkness, Snow White and the Huntsman, Men In Black: International, and the Thor franchise. His next upcoming blockbuster movie is Thor: Love and Thunder, due out in July 2022.