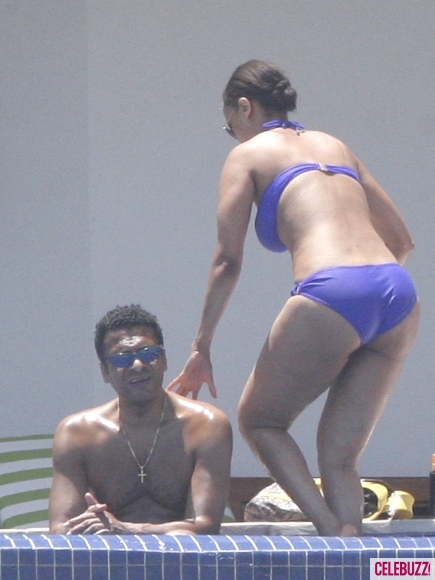 Celebrity Tyra Banks shows off her Body Type Two (BT2) figure/shape while on vacation. The full development of her lumbar and sacrum vertebrae and muscles/muscle mass relative to posture, including Classic Arch and Dimples, is debatable. Her mostly developed posture (vertebrae), muscles, and muscle mass across a good deal of her BT2 are clear, an advantage that BT3 and BT4 human bodies (female or male) lack.

Science recognizes that one pound of muscle burns six calories daily but one pound of fat/skinny fat only burns two to three calories. She is still looking good at the age of 48. Although the skinny fat including cellulite on her upper thighs, legs, and buttocks, no less, is obvious.

Which most probably means she has at least a slightly underdeveloped sacrum vertebra as well as several lumbar vertebrae. Diet, exercise, lifestyle, metabolism, and BMI matter, but so do genes/genetics/DNA. It will be interesting to see how well Tyra Banks manages and maintains her weight and body shape figure as she ages.

Television personality and Sports Illustrated swimsuit model Tyra Banks enjoys a day off in the hot tub and at the beach in her Body Type Two shape/figure. In her younger years, most people would likely have considered her a Body Type One (BT1). Aging has a way of showing the real truth.